The influence of Punk 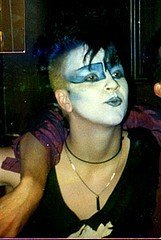 I was asked on Twitter to write a blog about the early days of Punk in the UK and the influence of Punk on the world of motion graphic design. I am influenced heavily by the punk movement that started in the seventies in New York and London. I was 12 when it all started to kick off in the UK with the Sex Pistols and their entourage, the Bromley Contingent causing joyful havoc in the UK media.

Before the punk scene things had become very sterile and safe. Politically, the UK was in a mess with regular strikes and power cuts disrupting everyday life. The music scene was drowning in boring “prog rock” and endless, indulgent guitar solos. Something had to give!

Then along came the idea that you didn’t have to put up with what you were being spoon-fed. The disillusioned youth of Great Britain realized they could make their own music, art, magazines and fashion. Using the influence of the New York underground music scene (Patti Smith, The New York Dolls, Richard Hell, Iggy Pop, Velvet Underground, The Ramones) the kids of the UK took it upon themselves to create a whole new genre and to revolutionize a complete culture in a way that had never been done before (or has ever been done since).

As you can imagine, this was a really exciting time for a teenager to grow up. It wasn’t really till 1977 that I got hooked into the Punk scene. I loved it! Before then I was an awkward, funny-looking, scruffy, Tom-boyish kid with glasses who didn’t really fit in. I survived at school by being the class clown, and that way avoided any physical abuse from my fellow classmates, but I was regularly ridiculed for being “the outsider”. Suddenly with the Punk scene I could belong! It’s ironic, isn’t it, that the movement that purported to be all about being different, and not caring what other folks thought, became a lifeline of acceptance to kids who didn’t fit in anywhere else. It wasn’t that we wanted to be different, and didn’t care, it’s that we cared and desperately wanted to belong to anyone who’d have us. It’s human nature to want to feel like part of a gang, or a movement.

Anyway, inevitably, the vultures descended, and what started as a revolutionary, do-it-yourself, creative movement turned into just yet another fashion. Mainstream media quickly gobbled it up and spat it out as a kind of bastardized version of what it one was, and things have never been quite the same again.

However, the marks and influences of the punk movement are still alive and kicking today. Next week I’ll look at some of the deigns of today that were influenced by this movement.

Angie’s Punk shuffle Track of the day – Anarchy in the UK – The Sex Pistols, listen free on Last FM