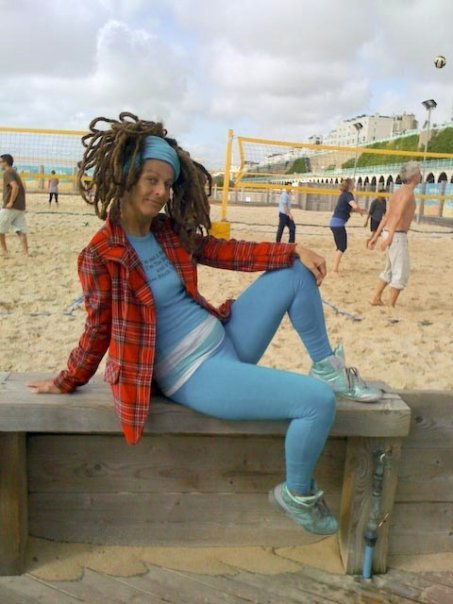 The Last picture I took of Ari on Brighton Beack earlier this year.

It was with a huge amount of sadness and shock that I heard about the death of my friend, Ari Up this week. I first met Ari in Aberdeen in 1978 when I was 14 and she was 16, fronting my all-time favorite band, the Slits. She was my hero back then, I totally looked up to her. I’m honored to say that she also became my friend, and what a caring, compassionate and life-enhancing friend she really was! She made me feel OK about who I was – a strange, bespectacled, gay, noisy, ugly-duckling with frizzy hair – not your typical girl!

I had become immersed in the punk movement because it initially represented originality, individuality, anarchy, creativity, chaos, inventiveness but had become disillusioned when it all started to change into conformity to it’s own set of established rules. The Slits were a proud exception, they never conformed to the male-dominated, tribe-like constructs of punk. Instead they truly stuck to it’s core principles, ignoring it’s prescribed fashions and making it up themselves as they went along their merry, musical way.

Ari and the other Slits had immense musical talent and originality which was sadly never fully recognized by the mainstream industry while Ari was alive. Their seminal album “Cut” is listed in many high-profile lists of all time top albums, and it received well-deserved critical acclaim. But their music was often too challenging, uncomfortable or simply unfashionable (a term often used to describe art that is ground-breaking). But they produced so much more that remains largely ignored, including the amazing Earthbeat with it’s wonderful tribal meanderings. Give their music another listen – I dare you! Ari at the last Slits gig in Brighton

Throughout the last few years I got to know Ari better. We worked together on some filming I did for The Slits and Ari’s other band, the True Warriors. I still have footage that we always planned to get out there but I never had time to edit. So, keep your eyes peeled and watch this space. My next project will be to edit the interviews I did with Ari and cut some of the concert footage, as a tribute to my friend. Ari was never afraid to stand up for what she believed in. She always stuck up for the down-trodden in society and accepted people whoever they were. She was always gracious and kind-hearted to her “fans” and made everyone around her feel special. She was truly on-in-a-million and I will miss her so much.

Here’s a link to “Heard it through the Grapevine” that we shot at the Meltdown Festival a few years back.

And FM from the Camden Underworld gig.