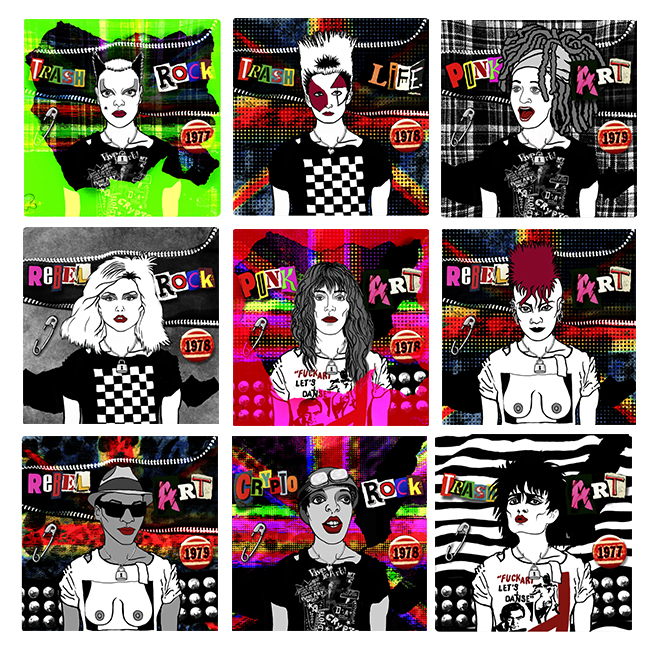 Proper Punks is the first Async Blueprints project by Angie Taylor. It’s a tribute to some of the original punks who were rocking the scene in the UK in the late 1970’s.

There are nine main characters, some rarer than others, including; Patti Smith, Siouxsie, Debbie Harry, Poly Styrene, Ari Up, Pauline Black, Soo Catwoman, Jordan Mooney and, a self-portrait of the artist herself, Angie Taylor. 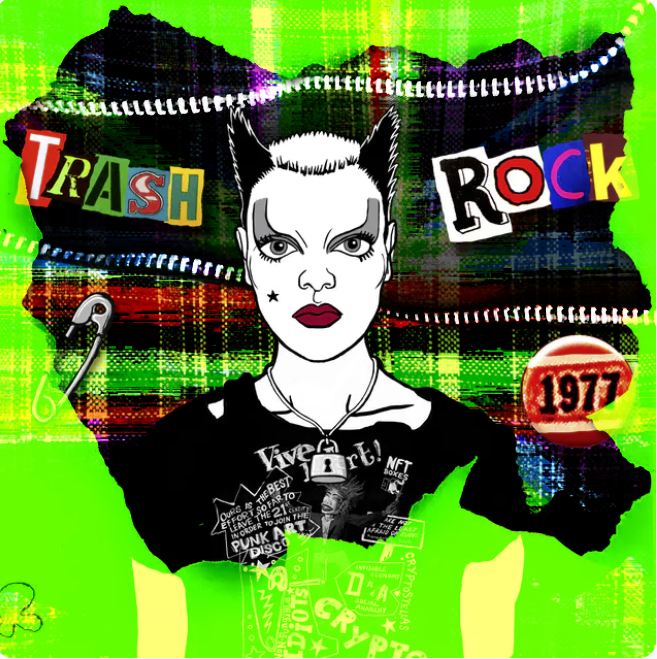 This is an artwork of 300 unique editions based upon hundreds of layers. Other randomly selected layers include iconic T-shirt designs from the period, badges, zips, safety-pins, rips and tears, patterned backgrounds and color overlays. There are also eight different text layers which combine to give messages.

All elements were hand-drawn by the artist. Some were modelled on her own photographs, others used public domain images as reference.

Two of the layers were based on 3D models created by the artist for the project. Own a piece of Angie’s punk rock tribute and create your own iconic, punk history.

Read more about the history and influences of Punk

Angie has written several articles and books about the influence of Punk is design. Read some of these articles here.

The influence of Punk

Angie Taylor - Art School ID card I was asked on Twitter to write a blog about the early days of Punk in the UK and the influence of Punk on the world of motion graphic design. I am influenced heavily by the punk movement that started in the seventies in New...
Read More

The Influence of Punk – part 2

Last week I spoke about the influence of punk in motion graphic design, the Punk rock revolution in the UK and how inspiring it was to young people like me. Today I'll talk about some of the great designers who emerged from that scene. I'll start by looking at two of...
Read More

The Influence of Punk – Part 3

In this final blog-episode about the influence of Punk on Design I intend to highlight some of our own designers who are clearly influenced by Punk. I'll start by mentioning one or two that emerged directly from the movement that followed the first few seeds...
Read More

After receiving good feedback for my blog on the influence of punk on design, I thought I'd keep on subject and write about the women of "punk" who inspired me personally, not just creatively, but in almost everything I do. I went to see my old friends The...
Read More