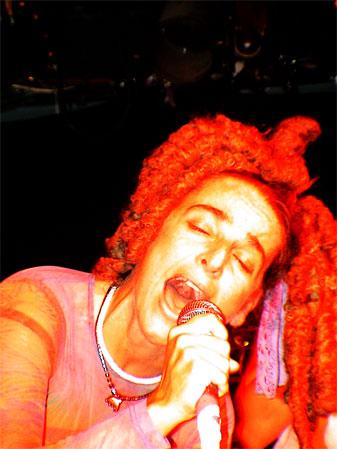 After receiving good feedback for my blog on the influence of punk on design, I thought I’d keep on subject and write about the women of “punk” who inspired me personally, not just creatively, but in almost everything I do.

I went to see my old friends The Slits last week in Brighton Concorde 2. They were just as amazing as ever, I don’t know how Ari, Tessa and the others have the energy to get up there every night and do their thing, as well as travelling. I was lucky enough to work with The Slits a few years back, producing and directing a live shoot of their gig at the Royal Festival Hall, part of Morrisey’s Meltdown Festival.

It’s funny, I was slightly concerned that it may be a mistake to meet my old punk heroes after so many years (I originally met them briefly in 1979) but I needn’t have worried, they were just as inspiring, revolutionary and refreshing as they ever were. Still continuing to break new ground and fighting against a music establishment that still considers it a novelty when women can write and play innovative and accomplished music.

What I really loved about The Slits, growing up was their originality. They were unlike any of the other “punk” bands. They didn’t seem to want to conform to the usual punk stereotypes of girls in fishnets and bondage clothing, their dress sense and music was taken from a wide range of different styles and cultures, uniquely “Slitsy”.

Their lyrics were confrontational, witty and anti-establishment in the most personal and positive way, they sang songs about the lives that “Typical Girls” led. They, like me, looked as if they would have had trouble “fitting in” before the punk movement came along, I could identify with them. And on top of that, I loved their music, a mix of reggae, dub, punk, soul and all sorts of other influences meant there was nobody else quite like them. Their rendition of Marvyn Gaye‘s “Heard it Through the Grapevine” is still one of my favorite cover-versions of all time.

It was a funny old day, the day of the Brighton gig. I regularly take my niece out on a Saturday morning, we go down to our local beach cafe for breakfast and to talk about life, the universe and everything! And who should we bump into but Ari, Tessa and co having breakfast! So we sat with them and they invited my niece Frankie along to the gig that night.

We all popped along there in the evening and had the best night out ever, The Slits were amazing, the crowd were lovely, lively and very friendly. Ari looked after us well, making sure that we got a safe spot, right at the front so that Frankie, and her friend, Faye didn’t get squashed.

They have a new album out, Trapped Animal, which I haven’t yet heard but has got good reviews. And Island Records are re-releasing their brilliant, seminal album, Cut as part of their “top 50 Island Records”.

So, it’s inspired me to start a series of blogs on women who have inspired me in my work. I’ll start with the ones considered to be “punks” and see where that takes me. Next week I’ll go back in time a little and look at some of my musical heroes from across the pond including Patti Smith and Nico.