The Influence of Punk – Part 3 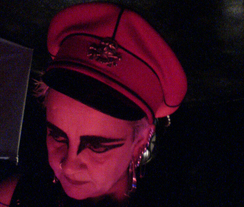 In this final blog-episode about the influence of Punk on Design I intend to highlight some of our own designers who are clearly influenced by Punk. I’ll start by mentioning one or two that emerged directly from the movement that followed the first few seeds sprinkled by the like of Vivienne Westwood and Jamie Reid, who I spoke about in the last episode.

The influence of fanzines like Sniffing Glue cannot be overlooked. Mark Perry, who was also the singer in Punk Band, Alternative TV started his fanzine in the summer of 1976, when the Punk Rock scene was at its most vibrant stage. At that time there was no media positively covering the emerging scene (although the mainstream British press were doing a good job of filling their front pages with outrage and condemnation). The amateurish and scrappy layouts took the whole ethos of Punk and applied it to magazine layout. Anyone could do this, all you needed was some paper, a marker pen, a creative mind, passion and a photocopier. In terms of layout and design there were no limits, to restrictions, no rules. It was a complete disregard for established “rules” of design” that allowed designers to wipe the slate clean and start again with a fresh new look.

It’s American counterpart, Punk ran for slightly longer, till 1979. This had a slightly more considered, “designed” look, using cartoonist, John Holstrom’s fabulous Crumb-esque characatures of the likes of Iggy Pop, The Ramones, Debbie Harry and Lou Reed  to adorn it’s pages. It was slammed for being light-weight in comparison to it’s British counterparts. It was quite weak and was run as a business so lacked the passion and energy that Sniffing Glue was oozing with. But that shouldn’t detract from some excellent imagery produced by the artist-in-residence.

It wasn’t long before trained Graphic Designers started to adopt the styles and freedom that Punk provided. The first example that really stood out for me was the cover of a single by Manchester band, The Buzzcocks. The image on the cover was a collage created from body parts from porn magazines, torn and composited, collage-style; the head of the woman was replaced with an iron. The image was designed by Linder Sterling, an artist and collaborator on the fanzine, Secret Public. Sleeve designer, Malcolm Garret who had just left art college was responsible for the Bauhaus-inspired typography, composition and color choices.  He went on to design all the subsequent covers for the Buzzcocks, then Duran Duran, Peter Gabriel and others. Malcolm really got the punk style established and has had continued success as one of our most well respected typographers and designers.

Other designers followed in the same vein. Neville Brody left college in 1980, where he designed posters for bands including the Human League. He went on to design artwork for post-punk bands like Depeche Mode and was catapulted to huge success after his work on the Face magazine. He is now an established graphic designer and typographer designing style for huge brands like the Guardian newspaper, and having work exhibited at the Victoria and Albert Museum.

Peter Saville was another contemporary who designed sleeves for Joy Division, New Order, Ultravox and developed the influential style of Factory records. His minimal style still looks current when placed next to contemporary designs.

So, these are a few examples of designers who have carried the influence of Punk through to today. I’m sure I’ve missed a few gems so please feel free to submit comments, inspirations and ideas. You can look everywhere to see design influenced by Punk and I’d love to see some of your own examples and comments.

Angie’s Shuffle track of the day – Blondie, Rip Her To Shreds – listen free on Last FM