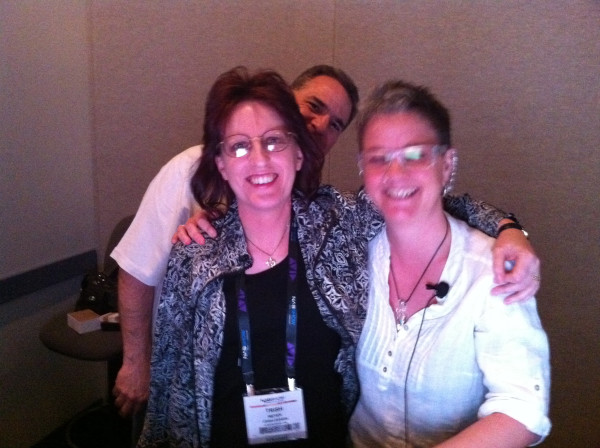 Well, here I am, back in the UK after an exhausting trip to Las Vegas to attend NAB 2011. I was speaking at the Post Production World Conference which I’m pleased to say was busier than ever. My sessions were very well attended and I met some great new people who gave me the most generous feedback, thanks to all of you! Keep an eye on this space for a recorded version of one of my sessions, coming soon! I also got to catch up with lots of old friends and colleagues at the Media Motion Ball and the Adobe party. I’ve made many life-long friends through this industry and it’s great to see them all in one place, although it could be a bit overwhelming for me at times-all that love and talent in one room!

So, what did I see at the show that impressed me? Well, top of my list has to be the new version of After Effects CS5.5 and companion products in the Production Premium CS5.5 suite. The new Production Premium suite delivers improved performance, workflow improvements and new powerful audio editing capabilities via Audition which I’m happy to say is finally back on the Mac!

The powerful Mercury Playback Engine has better GPU hardware support for laptops and more graphics cards are now supported. All this makes the Production Premium more compelling than ever as a comprehensive studio containing everything needed from creating your source material and storyboards to transcoding and delivering your final product in multiple formats. Me with Chris and Trish Meyer, courtesy of @mediaguy777

After Effects in particular is very exciting for me as it is my every-day application. The flag-ship feature is the is the ‘Warp Stabilizer’. Mainly aimed at folks shooting on DSLR and other hand held cameras, it tracks, stabilizes and scales your footage automatically. It also compensates for rolling shutter artefacts and can ‘heal’ the edges of the stabilized shot to minimize scaling.

The Camera Lens Blur effect is based on real-world lenses and  offers more realistic depth of field blurs. The Light Falloff effect enables users to simulate natural illumination falloff to mimic how light behaves in a 3D scene and can be used to create other light intensity effects.

There are also dedicated tools for Stereoscopic 3D workflows too including a 3D camera rig, new 3D Glasses effect and controls for 3D Focus and Convergence.

On the down side I must say that I am ever-so-slightly underwhelmed with this upgrade from the perspective of an animator/ motion graphic designer. Don’t get me wrong, what’s in there is great if these are features you need. I don’t know if it’s just my built-in habit of going against current trends but none of them are features that really excite me personally as much as past ones like Expressions, 3D, Shape and Text layers.

I guess it’s not surprising as I’m not really a visual effects artist, I’m more interested in making things look surreal than real! I want tools that help me push new boundaries and inspire me creatively, I’m afraid these features just don’t inspire me as much as say the Puppet tool or Vanishing Point feature did.

In my opinion the last couple of releases have focussed a little too much on visual effects features. I’d love to see the next release concentrate on more Motion Graphics oriented features and let Nuke and the Discreet systems fight it out for VFX supremacy.

I’m also a little disappointed that the Warp Stabilizer doesn’t include the ability to reverse the process of stabilisation to reintroduce wanted camera movement. When compositing elements into a shot, painting rigs, rotoscoping etc. It’s often desirable to steady the shot before you work, this makes adding visual effects much easier. But in many situations you may want to reintroduce the movement, it may be intentional camera movement, like seen so often these days in films shot in a hand held style.

Traditionally VFX artists would stabilize the footage, add VFX and then reverse the stabilization process, adding the movement back to the comped footage. The Warp Stabilizer does an absolutely amazing job of removing ‘unwanted camera movement’ but it doesn’t allow us to reintroduce our ‘wanted camera movements’. Sad as this addition could have made a good feature truly great. Me with the lovely Aharon Rabinowitz (courtesy of Michele Yamazaki)

Adobe also rolled out their new Subscription based system where you can effectively ‘hire’ the Creative Suite apps on a month by month basis. A great option for folks who only want to use apps on a project by project basis. Or may only want to use newer features now and then.

Red Giant Software had exciting new releases to showcase including great free tools. Colorista Free provides a simple yet comprehensive interface for After Effects and Final Cut Pro enabling creation and sharing of color profiles via CDLs. Color Decision Lists allow users to share color settings and metadata across a variety of systems.

LUT Buddy allows you to create, read and share LUT profiles directly from After Effects using any color correction effects you want. Color Lookup Tables are similar to CDLs (they do not include all metadata) in that they allow users to share color profiles between different systems, for example between desktop apps like After Effects and high-end DaVinci or Discreet systems. Previously the only way you could save LUTs from After Effects was via the full Color Finesse interface. Magic Bullet Grinder helps you get footage from your DSLR into Final Cut Pro timeline easily. They have also utilised their Magic Bullet technology to create some funky and exciting new tools for people who want to make movies on their iPhones and iPads.

Movie Looks allows you to add stylish pre-made “looks” to your iPhone movies, giving them a slick, professional look. Noir Photo provides and amazing level of control when creating cinematic black and white, monotone, or tinted images. It includes fun controls for adding dramatic lighting to your photos and developing them into professional-looking, polished images.

And of course, predictably, the expected unexpected was announced stop-press-style from Apple! The new Final Cut Pro X (Watch the videos, part one and part two) was finally announced at the Supermeet. This brand new version has been completely rewritten from the ground up. With a brand-new 64-bit architecture Final Cut Pro X can now take full advantage of all the RAM you can fit into your Mac, from Macbook Pro’s to high-end desktops, making performance significantly better. Grand Central Dispatch support also improves performance by optimizing the way your processors operate. Both of those features should result in significant speed and workflow enhancements.

Emphasis was put on ingest operations like auto-detection of footage content, for example, it can automatically detect how many people are in a shot, then label and manage the footage accordingly. This happens on ingest, in the background and creates data to help manage and organise footage without the need for manually adding keywords. It also auto-detects color balance irregularities and corrects them on ingest, using Color sync. Once you’ve got footage into the new Browser you can add keywords to clips or even to frame-ranges from within clips, this should make searching and managing content a whole lot easier.

Smart Bins can be created for clips, similar to the Smart Mailboxes from Apple Mail, or Smart Playlists from iTunes. Clips will be included into these smart bins as common data is detected. References to the clips can appear in multiple smart bins without having to create copies of the files. For example, you could have a clip of a person standing on the beach at night, this clip reference can be automatically placed both in the ‘Night shots” bin, the “beach shots” bin and the “One person” bin simultaneously without duplicating the item.

You can even edit your footage while it’s being ingested meaning there’s no need to wait while this is happening, you can get to work straight away . . . . as long as you’re working with disk-based media!

The star of the show for me though is the new Timeline. It looks and behaves like a sexy beast! The ‘Magnetic Timeline’ is so simple a concept that it’s brilliant. As you drag clips around the timeline, other clips automatically shift to accommodate the changes, there’s no need to add new tracks first to accommodate changes, Final Cut does this automatically as and when they are required. The Timeline is now fully native and resolution independent so you can get right into editing your footage straight away, mixing footage from different sources and formats without the need for transcoding,

You can now create Compound Clips which are kind of like After Effects precomposed comps. Select a few clips and group them into one single editable item. This has the benefit of simplifying the edit and making the editing process easier and more logical by reducing clutter in the timeline. I’ll be interested to see how it works practically, whether it renders the compound clips or keeps them live within the edit, very interesting though.

Keyframing motion properties of clips can be done directly in timeline now with a clear, easy to use graph editor. I’m not sure what level of control is available via the graph editor but it certainly looked pretty slick and easy to use. The application of retiming has also been simplified and improved with quick access to commonly-used speeds and the ability to easily create vari-speed effects by dragging on the edges of clips.

The new Auditioner allows yo to collect clips into ‘Audition groups’. These appear in the Timeline like little footage wells. You can sample clips within them using Cover-flow- style toggling of clips and compare results of them directly in the Viewer. This makes comparing clips and making edit decisions so much easier, great if you’re sitting with a client peering over your shoulder.

We didn’t see any plug-in-type effects used during the demo but color matching and balancing now appears to be integrated into the main application functionality. Color Board is a powerful primary and secondary color corrector which allows you to correct color based on channel selections or shapes.

Whats in there looks great but it’s hard to tell what it really operates like from a demo. Apple demo’s are always very slick and worked out to the nth degree. If it is as simple and brilliant as it looks then fantastic but I have some concerns about what’s missing from the list of features though. There was no mention of support for tape-based capturing or EDL support, making me wonder whether Apple are abandoning old technology altogether and relying on the fact that there are enough people using an exclusive disk-based workflow. I must say that most facilities I work in still use tape so I can see this being an issue if the rumours circulating are true.

There was no mention of third party plug-in support either which also concerns me. The third party plug-in developers are often the ones who push the big companies to continuously improve their apps by innovating and really listening to users. It would be a sad day if Apple was to turn it’s back on these pioneers.

So that’s a quick round up of NAB 2011. I must admit I didn’t get to see as much as I’d planned to this year. The jet lagged killed me and I was kept busy at the conference most of the time. But these are the highlights I saw on my travels. As a special NAB promotion I have a discount code for you to get money off my video training workshops here on my website. You can download free movies here and if you like them enough to buy a complete workshop, use this code on checkout. it’s good till the end of April 2011; ATV2B20. Until next year, goodbye Vegas and NAB.